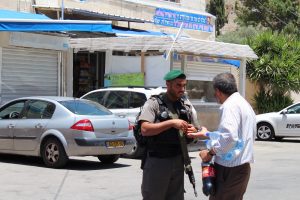 The Palestinian-Israeli Conflict is quickly approaching its one hundredth year. It is a conflict of both regional and international importance involving Israel, the Palestinians, Syria, Lebanon, Jordan, Egypt, Iraq, the United States, the nations of the Arabian Peninsula, and the European Union. Since Israel’s independence in 1948, the Palestinian-Israeli conflict has involved Israel’s Arab neighbors on six separate occasions: the 1948 Arab-Israeli War, the 1956 Suez Crisis, the 1967 Arab-Israeli War, the 1973 Arab-Israeli War, the 1975-1990 Lebanese Civil War, and 2006 Lebanon War. There have been additional conflicts directly between Israelis and Palestinians including the First Intifada (1987-1991), the Second Intifada (2000-2005), and escalations in Gaza in 2008, 2012, and 2014.

Churches for Middle East Peace (CMEP) believes working towards a just and lasting solution to the Palestinian-Israeli conflict would not only serve the cause of peace and justice in the Holy Land but also promote peace in the broader Middle East region in general.

For Israelis, a peace agreement must include the following components: recognition of the right to exist from the broader Arab world, agreement on strategically defensible borders for Israel, the reestablishment of a vibrant Jewish community in the Old City of Jerusalem, and an end to the threats of suicide bombings and rocket attacks. For Palestinians, a negotiated settlement must address the status of displaced refugees, ensure access to Christian and Muslim Holy Sites in Jerusalem, bring about the evacuation of Israeli settlements in  East Jerusalem and the West Bank, provide for the dismantling of the separation barrier, and create a fully sovereign Palestinian state.

To address all of these concerns, CMEP pursues a just and durable resolution of the Israeli-Palestinian crisis in which Israelis and Palestinians realize the vision of a just peace, which illuminates human dignity and cultivates thriving relationships. CMEP would support a negotiated two-state solution to the Israeli-Palestinian conflict that includes an end to the violence, security for all peoples, an end to the Israeli occupation of Palestinian lands, the establishment of a viable and contiguous Palestinian state, and an agreement on Jerusalem that allows the city to be shared by the two peoples and three faiths. CMEP believes that working towards a just and lasting solution to the Palestinian-Israeli conflict would also promote peace in the broader Middle East by resolving grievances of those who exploit this conflict to serve their own ideological motives (see CMEP policy guidelines). 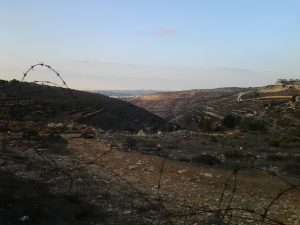 Countryside near Tent of Nations

CMEP Curriculum for Palestinian-Israeli Conflict: The Search for Peace and Justice in the Holy Land is a curriculum designed to be taught in a small-group setting over a period of five weeks with one 90-120 minute session each week, based on discussion time. It can also be taught in one hour sessions over the course of ten weeks with one week sharing content and the second week of each session being reserved for discussion. Learn More

Competing Narratives: Carefully chosen language is vital when discussing the Palestinian-Israeli Conflict. Even the simplest of terms often betrays a political stance. The following guide explains the differences in the nuanced terminology used by Palestinians and Israelis to describe the conflict. Read More

Israel: Comprising 78 percent of the historic Palestine, Israel became independent in 1948. Since then, Israel has been at war six times with its neighbors and has had many additional conflicts directly with Palestinians within the occupied Palestinian territories of East Jerusalem, the West Bank, and Gaza.

West Bank: The territory lying between the 1948 Cease Fire Line (Green Line) and the Jordan River has a population of about 3 million, including 600,000 Israeli settlers, as of 2015. The division of the West Bank into Israeli and Palestinian zones of administration (Zones A, B, C), the construction of the separation barrier, and expansion of Israeli settlements are some of the challenges facing the Palestinian population there. Read More

Gaza Strip: During the 2014 Gaza War, the main power plant is Gaza was damaged severely. Since then, the infrastructure crisis has grown exponentially. Currently, in late 2018, Gazans typically only have electricity for 3-4 hours per day, leaving them in darkness for about 21 hours. Read More

Jerusalem: Sacred to Jews, Muslims, and Christians alike, the status of Jerusalem must be resolved in a comprehensive Israeli-Palestinian peace agreement, assuring access to the Holy Sites for all three Abrahamic faith traditions. Read More

Settlements and Displacement: The existence and continuing expansion of illegal Israeli settlements on Palestinian lands increasingly dims the hopes and realistic prospects for a two-state solution and is a major threat to peace. Read More

Separation Barrier: In 2003, Israel announced the construction of a barrier to enclose the West Bank. Israelis refer to the barrier as the Security Fence while to Palestinians it is known as the Apartheid Wall. Only 15 percent of the separation barrier follows the 1948 Green Line. The remainder cuts into the West Bank, incorporating Israeli settlements, separating villages from their adjoining lands, and obstructing the local Palestinian economy. The barrier has been deemed illegal according to international law. Read More

Child Detention:  Every year between 500 and 700 Palestinian children are tried in the West Bank under Israeli military law. Ensuring that minors receive treatment in accordance with the needs of their age within criminal justice systems is a widely accepted principle of international law. Read More

Fifty Years Too Long: CMEP issued a statement around the 50th Anniversary of the occupation which stated: “This June 2017 marks 50 years since the beginning of Israel’s military occupation of Palestinian lands, an occupation that harms both peoples…During this 50th year, we acknowledge that while peace is the only way forward, many do not believe peace is possible. Ongoing settlement expansion combined with violence and incitement by both Palestinians and Israelis have resulted in fear and mistrust.” Read More

Reality Check: Almost Fifty Years of Occupation [B’Tselem, 2017]
“A year from now, Israel’s occupation of the West Bank and Gaza Strip will mark its fiftieth anniversary. A third, even fourth, generation of Palestinians and Israelis have been born into this reality, and it is the only one they know.” Read More

The Peace Process in Documents

The McMahon Letter (October 24, 1915)
Correspondence between Sir Henry McMahon, British High Commission of Egypt, and Sherif Hussein ibn Ali of Mecca in which the British agree to recognize the Sherif’s claims to an Arab state consisting of  Mesopotamia, the Arabian Peninsula, and Syria east of Damascus-Homs-Aleppo line.

The Sykes-Picot Agreement (May 15-16, 1916)
Secret agreement among British, French, and Russians to partition the Ottoman Empire after World War I. Designates some areas under direct European control while creating larger spheres of influence in the region. Palestine is designated as an area under joint British-French-Russian administration.

The Balfour Declaration (November 2, 1917)
A statement by British Foreign Secretary Arthur Balflour recommending “the establishment in Palestine of a national home for the Jewish people.”

Emir Feisal and Chaim Weizmann Agreement (January 3, 1919)
An agreement between Emir Feisal ibn Hussein of Mecca and Chaim Weizman, President of the World Zionist Organization to encourage Jewish immigration to Palestine as well as to provide safeguards for the rights of the indigenous community. This agreement was conditioned upon Britain and France upholding their promise to establish an independent Arab state in Syria.

British White Paper of June 1939
“In the light of the discussions as well as of the situation in Palestine and of the Reports of the Royal Commission and the Partition Commission, certain proposals were formulated by His Majesty’s Government and were laid before the Arab and Jewish Delegations as the basis of an agreed settlement. Neither the Arab nor the Jewish delegation felt able to accept these proposals, and the conferences therefore did not result in an agreement. Accordingly His Majesty’s Government are free to formulate their own policy, and after careful consideration they have decided to adhere generally to the proposals which were finally submitted to and discussed with the Arab and Jewish delegations.”

UN General Assembly: Resolution 181 (November 29, 1947)
International agreement by the United Nations to terminate the British Mandate of Palestine and establishes a plan for partitioning Palestine between a Jewish and an Arab state. Jerusalem is set aside as an international city.

UN General Assembly Resolution 194 (December 11, 1948)
International agreement creating a Conciliatory Commission consisting of France, Turkey, and the United States for the purposes of coordination with local authorities in preparation of partition.

Egypt and Israel Peace Treaty (March 26, 1979)
A treaty reached between Egyptian President Anwar Sadat and Israeli Prime Minister Menachem Begin stipulating a staged withdraw of Israeli forces from the Sinai Peninsula and complete normalization of relations between Egypt and Israel.

Oslo Agreement: Declaration of Principles on Interim Self-Government Arrangements (September 13, 1993)
An agreement establishing formal mutual recognition between the government of Israel and the P.L.O. Israel commits to a five-year transitional period for withdrawing from Gaza and Jericho.

Israel and Jordan: Peace Treaty (October 26, 1994)
A Treaty reached between Jordanian Prime Minister Abdul Salam Majali and Israeli Prime Minister Yitzhak Rabin establishing the international border between Israel and Jordan as well as providing for complete normalization of relations between the two countries.

Oslo II Agreement: Interim Agreement on the West Bank and Gaza Strip (September 28, 1995)
Agreement reached at Oslo between the government of Israel and the P.L.O to establish an elected Palestinian Interim Self-Government Authority (PA) and to begin the process of transferring governing authority in the West Bank to the PA. The PA obtains complete sovereignty over Zone A and Israel maintains complete sovereignty over Zone C. Zone B is administered by the PA while Israeli defense forces provide security.

Arab League Summit: Beirut Declaration (March 28, 2002)
A resolution affirmed by the Arab League to normalize relations with Israel on the basis of the “land for peace” formula. In exchange for a withdrawal from all territories occupied since 1967, the Arab League would agree to “consider the Arab-Israeli conflict ended.”

The Peace Process in Maps

Hebron Protocol (1997)
An interactive map showing the division of Hebron between H1 and H2 zones.

Taba Summit: Palestinian Proposal (2001)
An interactive map of the West Bank showing the Palestinian peace proposal at the Taba Summit.