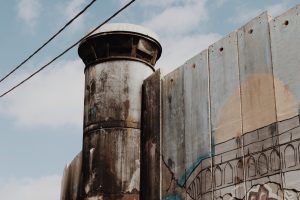 During the Second Intifada, Israel announced the construction of a barrier to separate Israel from the West Bank. Construction began in 2003, and as of 2017 it is nearly 65 percent complete. In rural areas, the barrier consists of a state-of-the-art electronic fence. An imposing concrete wall 30 feet high–over twice the height of the Berlin Wall–runs through urban areas. Israelis typically refer to the barrier as the Security Fence and attribute the decline in suicide bombings within Israel to its construction. Palestinians frequently refer to the barrier as the Apartheid Wall. They deny that the decline in suicide bombings has anything to do will the construction of the barrier and argue that its true purpose is to create a segregated society where Palestinians remain under Israeli occupation. 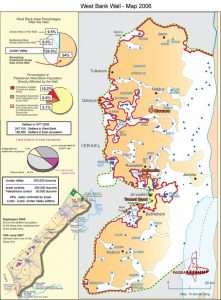 Route of the Separation Barrier

The route of the barrier suggests much about its purpose. Only 15 percent follows the 1949 Green Line. The remainder cuts into the West Bank. In its deviations from the Green Line, the Separation Barrier incorporates 440,000 of the almost 600,000 Israeli settlers into a contiguous block of territory with pre-1967 Israel. In addition to the more than 325,000 Palestinians of East Jerusalem who are separated by the barrier from the West Bank, 32 additional Palestinian villages fall between the 1948 Green Line and the Separation Barrier. Because its route does not exactly follow the ceasefire line, the international community has deemed its construction a violation of international law (see 2004 UN General Assembly non-binding resolution).

Churches for Middle East Peace (CMEP) opposes routing the security barrier through Palestinian lands and the limitations imposed on freedom of movement and economic activity by its construction (see Policy Position 3).

The fertile Cremisan Valley lies between the Palestinian village of Beit Jala and the Israeli settlement of Har Gilo near Bethlehem. Since 2006, the Israel Defense Forces (IDF) have been planning on extending the Separation Barrier across the valley. If completed, this barrier would cut off 58 Palestinian families in Beit Jala from 850 acres of farmland in the valley, as well as preventing the children of Beit Jala from attending school at the nearby Catholic monastery and convent. While the Israeli High Court overruled the IDF’s building plans in April 2015, they reversed their decision later that year in August, allowing construction to go ahead.

“15 Years of Separation: The Palestinians Cut Off From Jerusalem by the Wall”, Ha’aretz, 2018

“For the Palestinians, the Jerusalem envelope created urban spaces that are completely different from those that existed in the pre-wall period. The most striking result has been the severance of Jerusalem from both Bethlehem and Ramallah, which effectively cuts off Jerusalem’s Palestinian residents from the West Bank.” Read More

“A Daily Palestinian’s Commute Through an Israeli Checkpoint”, Washington Post, 2017

“It is dark outside his family’s three-story home in Hebron when we arrive to follow Taweel on his daily commute. Although it might take him three or four hours to get to his construction site in East Jerusalem, the entire trip is only 20 miles as the crow flies.” Read More

“The Impact of the Barrier on the Jerusalem Area” [UNOCHA 2017]

“The Barrier’s deviation from the Israeli-declared municipal boundary of Jerusalem has resulted in some Palestinian localities in East Jerusalem, especially Kafr Aqab and Shufat camp area, becoming separated from the urban centre. Although residents retain their permanent residency status and continue to pay municipal taxes, these areas have effectively been abandoned by the municipality.” Read More

“Impact of the barrier on agricultural productivity” [UNOCHA 2017]

“The limited allocation of permits, combined with the restricted number and opening times of the Barrier gates, impedes essential year-round agricultural activities such as ploughing, pruning, fertilizing, and pest and weed management. As a result, there is an adverse impact on olive productivity and value. Data collected by OCHA in the northern West Bank show that the yield of olive trees in the area between the Barrier and the Green Line has reduced by approximately 65 per cent in comparison with equivalent trees in areas accessible all year round.” Read More

“Humanitarian Impact of the Barrier” [UNOCHA 2013]

A factsheet on the Barrier from the United Nations Office for the Coordination of Humanitarian Affairs focusing on case studies from Bethlehem, Kafr ‘Aqab (neighborhood in Jerusalem), Qalailiya, and Barta’a. Read More

“In June 2002, when Palestinian attacks against Israeli citizens were at their peak, the Israeli government decided to build the barrier and termed it a temporary security measure intended to protect Israel from terrorist attacks from the West Bank. All the decisions and documents on this subject have emphasized that the barrier does not signify a future political border. Yet the Separation Barrier was erected primarily within the occupied West Bank, and in a way to function as a border. The barrier’s route, determined in part by the location of many of Israel’s West Bank settlements, creates the infrastructure for de facto annexation of most of the settlements and settlers” Read More