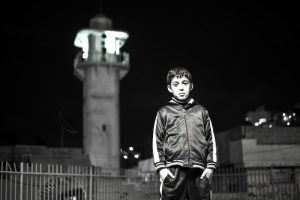 Take Action Today! Use Your Voice to Promote Human Rights for Palestinian Children

Since the West Bank is a part of the occupied Palestinian territories (oPt) and has not been annexed by Israel, all criminal cases there–including those involving juveniles–fall under the jurisdiction of Israeli military law. In principle, military courts comply with the obligations of an occupying power under international law (see Fourth Geneva Convention). However, human rights organizations working in the West Bank, including B’Tselem, United Nations Children’s Fund (UNICEF), and Defense for Children International (DCI), have extensively documented reports of mistreatment of Palestinian youth within the Israeli military detention system. Such allegations include both unreasonable use of force (such as threats, intimidation, long-term handcuffing, beatings, and solitary confinement) as well as lack of due process of law, as noted by the U.S. State Department’s Human Rights Report for Israel and the Palestinian Territories. If true, such practices would constitute a breach of the United Nations Convention on the Rights of the Child, which Israel ratified in 1991. Churches for Middle East Peace (CMEP) believes that all children, regardless of whether they are guilty or innocent, deserve to “be treated…in a manner which takes into account the needs of persons of his or her age” within criminal justice systems around the world, including Israel (see CMEP Policy Position 12).

U.S. Tax Dollars Must Not Be Used to Detail Palestinian Children, The Nation, 2017
U.S. Representative Betty McCollum (MN-4) details the alleged abuses of the Israeli military court system’s treatment of Palestinian children. She argues that in the face of such evidence, the United States must ensure that foreign aid going to Israel is not supporting such injustices. Read More

Minors in Jeopardy: Violation of the Rights of Palestinian Minors by Israel’s Military Courts, B’Tselem, 2018
“The changes Israel has made [to its military justice system] have had no more than a negligible impact on minors’ rights. It would seem that they have far more to do with improved appearances than with what happens in actual practice. The reports – spanning a period of years, published by a variety of groups and agencies, relying on diverse methodologies – all point to the same factual findings which demonstrate that minors’ rights are regularly and systematically violated.” Read More

Statistics on Palestinian minors in the custody of the Israeli security forces [B’Tselem, 2018]
Monthly statistics on child military detentions from 2008-2017, broken down by age and legal status as reported by the Israel Prison Service. Read More