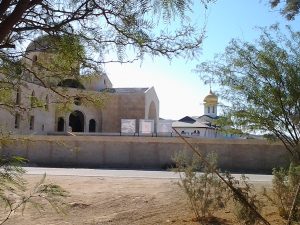 Church of John the Baptist, Bethany Beyond the Jordan

Christianity’s 2000-year-old presence in the Middle East is very much in jeopardy. The last century has witnessed a frightening decline in the Christian population of the Middle East. In 1900, the 15.8 million Christians of the Ottoman Empire represented between 10 and 15 percent of the population of what is today Turkey, Syria, Lebanon, Iraq, Jordan, Israel/Palestine and Egypt. As of 2015, Christians comprise less than 5 percent of the population within that same region.

The causes of decline have been both social and political. On one hand, Christian families tend to have far fewer children (1.7 children per woman) than Muslim families (2.9 children per woman). In addition, the Christian population of the Middle East is significantly older (median age 29 years) than the Muslim population (median age 23 years old). But political instability has played a significant role as well. The Palestinian-Israeli Conflict, Syrian Civil War, War in Iraq, and unrest in Egypt have driven a steady stream of Christian emigration to Europe and North America.

Churches for Middle East Peace (CMEP) is very concerned about the rise of extremism that targets Christians and religious minorities in the Middle East. CMEP is committed to the building of inclusive societies based on citizenship rights where persons of all religions can live together in harmony and peace, and calls on the US government to support political solutions that can secure such a reality.

Learn more about ways CMEP has taken action in the past to support the sustainability of Christians in the Holy Land through past action alerts. Please note that these action alerts are no longer active requests to Congress and should not be filled out.

April 2018: Tell Congress: The Administration Must Stand Up for the Christian Community in Jerusalem and the Holy Land
In February, the Israeli Knesset first considered legislation that would allow for state expropriation of Church lands. After a meeting with Minister Hanegbi in mid September, Church leaders in Jerusalem were stunned to see the legislation once again under consideration in the Knesset. While Prime Minister Netanyahu delayed the planned vote, it will once again be placed in the Legislative Committee of the Knesset on Sunday, November 4. The legislation remains a significant threat to the Status Quo and the sustainability of the Christian community in the Holy Land.

#ReligiousFreedom (2020)
“Religious freedom is a real issue around the world. CMEP’s Executive Director, Rev. Dr. Mae Cannon, talks with Ambassador at Large for International Religious Freedom, Sam Brownback. What is happening? Why should we care? Will it happen here? What can we do?
Take a listen to the latest episode of #Activism!”  Listen Here

Joint Letter to Secretary Pompeo Regarding Bill of Church Lands (2018)
“The extent to which the Jerusalem Patriarchs and Heads of Churches consider this legislation to be an existential threat cannot be overstated. When the bill was first introduced this past February (concurrently with a proposed municipal tax on church property) the Heads of Churches protested by ​closing the Church of the Holy Sepulchre in a historic act of solidarity. In response, eighteen religious leaders in the U.S., representing a diverse spectrum of Christianity, wrote to ​President Trump ​expressing the need to protect the vulnerable Christian community in Jerusalem and the Holy Land. Mr. Secretary, all efforts must be made so that a similar crisis may be avoided.” Read More

Eighteen Religious Leaders Call on Trump Administration to Stand with Christian Community in Jerusalem and the Holy Land (2018)
“President Trump, we ask that you make use of your good relations with the government of Israel to impress upon them the importance of an immediate reversal of both of these threats to the Status Quo. These actions will affirm the United States’ commitment to religious freedom and will ensure that Christianity in Jerusalem remains a vibrant force for peace and reconciliation in the future.” Read More

The Future of the Church in the Holy Land is in Peril (2018)
“CMEP calls upon President Trump and his administration to immediately intervene with the appropriate Israeli authorities to ensure the Jerusalem municipality reverses its decision regarding the collection of illegitimate taxes and to ensure that the “Bill of Church Lands” legislation is permanently withdrawn. Without such action, the Christian community in Jerusalem might soon suffer irreparable damage and eventually cease to exist. These actions of the Israeli government are an existential threat to the future of the Christian church in the Holy Land.” Read More

Advent Statement by US Christian Leaders in Solidarity with Jerusalem Heads of Churches (2017)
“As leaders of Christian churches and organizations in the United States, we hold that the Status Quo is key to maintaining peaceful relations among religious communities, ensuring their access to Jerusalem’s sacred places.” Read More

CMEP Condemns Abductions of Syrian Bishops (2013)
“The kidnapping of Syriac Metropolitan Orthodox Bishop Yohanna Ibrahim  and Greek Orthodox Metropolitan Bishop Paul Yazigi took place in the village of Kfar Dael in northern Syria. Their driver, Fatha’Allah Kabboud, a Syriac Orthodox Deacon, was killed in the kidnapping. Both Metropolitans are known for their humanitarian work on behalf of Orthodox Christian Charities and for preaching tolerance. This shameless assault on clergy crosses a new line in the deteriorating situation in Syria, with its rich history of interreligious culture.”  Read More

Letter to Secretary Clinton about Access to Holy Sites (2011)
“While we hope that you continue to work for implementation of key components of the U.S.-negotiated 2005 Agreement on Movement and Access throughout the year, we ask that you give immediate attention to urging Israeli authorities to approve requests for access permits submitted by church officials during this Easter season.” Read More

CMEP Letter to Secretary Clinton Regarding Attacks on Iraqi Christians (2010)
“Recognizing that religious division in Iraq has increased with the U.S. presence, we urge that U.S. policies seek in every way possible to reinforce the strong history of peaceful religious coexistence in Iraq. As U.S. forces withdraw, the United States has a moral responsibility to help Iraq rebuild in a way that upholds the lives, dignity and security of all its citizens.”  Read More

To be “orthodox” means to have the right beliefs. Eastern (Greek) Orthodox Christians affirm the creeds of the first seven Ecumenical Church Councils, which established the doctrines of the Holy Trinity and the nature of Christ.  There is no singular “orthodox church;” instead, the Orthodox Communion is an association of national churches, each with its own leader or patriarch. All Eastern (Greek) Orthodox churches share the same theology and practices (which are both liturgical and sacramental). In the Middle East, these churches include the Patriarchate of Jerusalem, the Patriarchate of Antioch and All the East, and the Patriarchate of Alexandria and All Africa.

The Church of the East

Outlook: Christianity in Israel is growing due to Russian immigration following the fall of the Soviet Union in 1991 and the emergence of a Messianic Jewish community in the 1970s. Nevertheless, the passage of the Jewish Nation State Basic Law raises serious concerns for the future of Christians–and in particular Palestinian Christians–in Israel.

Christianity in the Palestinian Territories

Outlook: Christianity in the occupied Palestinian territories of the Gaza Strip and West Bank is on the verge of disappearing. While Palestinian Christians are not persecuted for being Christians, they are harmed by the Israeli occupation just as much as their Muslim neighbors. It has proven easier for Palestinian Christians to emigrate to Europe and the Americans to escape the political instability than it has for Palestinian Muslims. In addition, Christian religious leaders in Jerusalem warn of the changing Status Quo that has enabled Christians, Muslims, and Jews to share contested sacred spaces for the last 300 years.

Outlook: Jordan is one of the few countries in the region where Christianity appears stable. In fact, since the start of the Syrian civil war, many Syrian Christians have taken refuge in Jordan leading to a significant increase in the number of Christians in the last decade.

Outlook: The Syrian Civil War, which began in 2011, has devastated Syria’s Christian community (many of whom have been supportive of Syria’s current government). At least 400,000 Christians have fled Syria, a decrease of about 20 percent. Before the war, Christians could be found throughout Syria, today they almost solely clustered in urban areas that remained under government control.

Outlook: Following Lebanon’s decades-long civil war (1975-1990), the National Pact  mandated that the country’s president must be a Christian. Christians continue to hold political power in Lebanon to this day, despite being only a third of the population. No official religious census can be taken for fear that it will disrupt the fragile peace.

Outlook: Since the Arab Spring demonstrations toppled the 30-year regime of Hosni Mubarak, Christians in Egypt have faced uncertain times. First, the Muslim Brotherhood briefly held political power between 2012 and 2013. Christians generally welcomed the takeover of President Sisi in 2013, but this second regime change in as many years did not bring about stability. In 2016, the Islamic State established a stronghold in Sinai. More than 100 Christians have been killed in terrorist attacks since then. Facing political instability and rising extremism, approximately 93,000 Christians have fled Egypt since the Arab Spring began in 2011.

Outlook: Fifteen years of war have devastated the Christian community of Iraq. During the U.S. occupation of Iraq (2003-2011), 1 million Christians emigrated from Iraq. The rise of the Islamic State of Iraq and the Levant/Syria (ISIL or ISIS) exacerbated what was already a fragile existence for Iraqi Christians. In 2014 the U.S. House of Representatives passed a concurrent resolution recognizing the actions taken by ISIL against Iraqi Christians and other minorities as genocide. ISIL no longer holds any territory in Iraq, but the damage done to Christian communities may be irreparable. Over two-thirds of the pre-war Christian community have either been displaced or killed.