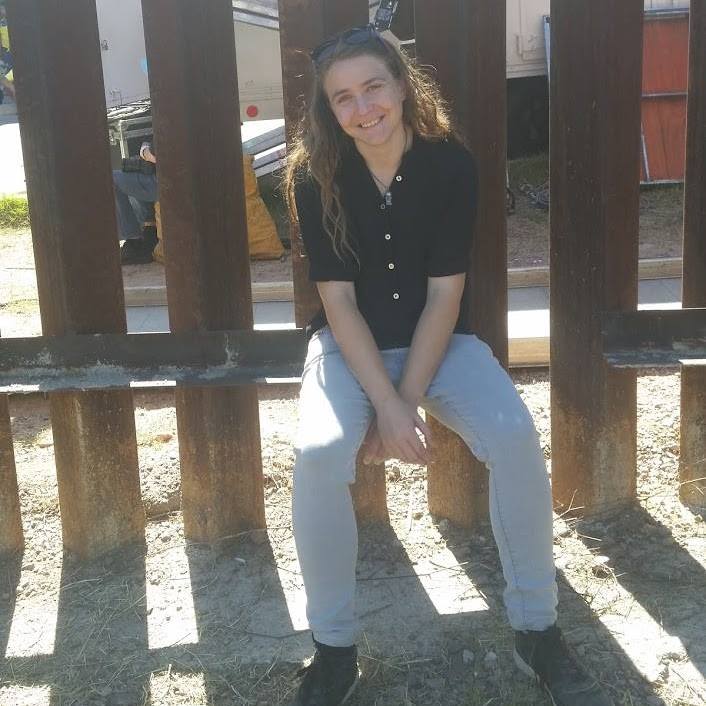 Sahar Vardi, an Israeli peace activist from Jerusalem, has been working to promote peace and justice in Israel/Palestine since the early age of thirteen. Influenced by her father, who refused military service during the first intifada, Sahar was exposed to the realities on the ground in the Occupied Palestinian Territories. In 2003 Sahar would accompanied her father to a small village located near Jerusalem. There, they planted  olive trees and painted murals on the school of the neighboring village. She continued to visit the village throughout the second intifada as Israel’s separation wall was being built. In this village, Sahar was deeply impacted by the interactions she had within the community by connecting with those around her on a personal level. Seeing the construction of the wall and the effects it had on the village, Sahar notes that this was the beginning of the politicization process, as despite being merely fifteen minutes away, her and the people she knew in the village were living almost entirely different realities.

Influenced by the injustices she witnessed, Sahar decided at the age of fifteen that she was not going to serve in the Israeli Defense Forces (IDF), which is mandatory for all Israelis when they turn eighteen. Sahar is internationally known for her refusal to serve, in which she and others alike, are known as “conscientious objectors.” Her original draft date was 2008, and she has served three prison sentences for her choice not to serve.  This decision continues to influence her efforts as she works to promote change in Israel/Palestine.

Sahar is actively involved in many initiatives that work to educate, mobilize and counter militarization on a societal and economic level. Sahar serves as the Israel Program Coordinator in East Jerusalem for American Friends Service Committee (AFSC), a Quaker organization that promotes lasting peace with justice. Through AFSC, Sahar partners with other refusers and youth around the age of conscription to provide support through a multitude of efforts, including facilitating conversations about military service, raising awareness of the consequences of both serving and refusing, and providing a support network for those who chose not to serve as they risk imprisonment and other long-term legal and societal repercussions.

While providing support for refusers, Sahar expands these efforts to counter the export of arms and the military economy. Sahar is a member of Hamushim, a joint project of the Coalition of Women for Peace and American Friends Service Committee (launched in 2014) that works to expose the human price of the Israeli military industry and arms trade, as well as to mobilize actions against it. Israel is the sixth largest exporter of weapons in the world, and the number one largest exporter per capita. This system, according to Sahar, is based on the ability to develop, test and market weapons as battle proven; “The fact that this is tested on an ongoing basis because of the occupation, has created a situation where Israel has a substantial economic interest in maintaining the occupation because of the military industry,” she explains.

Within the discourse of militarization and security, the voices of women are drastically underrepresented. When talking about these issues, which is a discourse primarily dominated by men, embracing a feminist perspective shifts the conversation towards understanding the realities and impact that militarization has on a local and global scale. Sahar says, “Part of our role as women within this world (discourse on security) is bringing these terms of security, that are very elitist and only a few chosen men get to speak about, and to translate them into human experience,showing how women are more affected than men and also affected differently. Part of our role as women is to shift the conversation back to earth – back to what’s happening on the ground.”

To engage people on a communal level, it is important to establish safe spaces that enable conversations and activism to continue. Sahar is currently part of a grassroots initiative forming a cooperative activist center in Jerusalem called Imbala, which was established in 2017 by Jerusalem activists, artists and people from diverse backgrounds. Imbala, “created a communal space for co-resistance in Jerusalem — a place for Jerusalemites who feel unwelcome in other parts of the city.” Creating a space for this is imperative and seeks to open more people up to having these conversations. Sahar says, “The feeling is that these days, you can’t have a random conversation about politics in a pub because you do not know who will be listening,”

While actively promoting change on the ground in Israel/Palestine, Sahar also notes the importance of having these conversations in the U.S. context, as the closely allied countries are both impacted by these policies; “The blind support from the U.S. to Israel, it’s economic, it’s military aid and support, it’s also immunity. At the moment, the U.S. offers Israel guard from accountability. Lack of accountability is a lot of what allows the policies to continue, especially in a world where Europe is moving away from that. Today, most European countries are moving towards a place of offering different forms of accountability, be it the international legal system or banning settlement products or economic trade agreements; there’s increased methods of creating accountability, while the U.S. is moving in the opposite direction. That’s why these conversations need to happen in the U.S. and how we can move civil society into this. We need to understand how we can gear civil society into this… it’s not just out of pity or solidarity with people from the Middle East, but also understanding how it affects policies in the U.S. and how it affects the lives of people in the U.S. Making those connections and understanding that our communities are affected by similar policies is a lot of where the power of grassroots lie, and this how we can turn truth into power.”

CMEP is continually inspired by peace activists like Sahar Vardi. To learn more about the work Sahar is involved in, follow these links:

Please join us this June 17-19, 2018 in Washington, D.C. at CMEP’s Advocacy Summit And Still We Rise, to meet Sahar Vardi and other incredible women making peace in their communities in the Middle East.

God of the Universe, we pray for peacemakers in the Holy Land, that you would guide their efforts as they work together to bring peace to their communities. We pray that you give them hope in the midst of conflict to continue their work. Help us as we continually seek ways to support them and actively pursue a just peace.

This story was written by a volunteer at Churches for Middle East Peace (CMEP).

One Comment On “Sahar Vardi: Challenging the Status-Quo within Israeli Society”