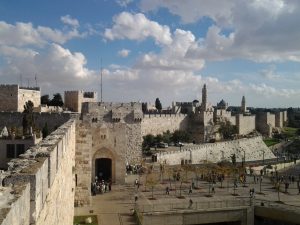 Known in Hebrew as Yerushalayim and in Arabic as al-Quds, Jerusalem’s multi-religious landscape includes the sacred sites of the three major Abrahamic religions–Judaism, Christianity, and Islam. But attempts to claim exclusive right to the city have resulted in generations of conflict. In order to resolve these disputes, the Ottoman sultans instituted a series of agreements beginning in 1622 to preserve the status quo in Jerusalem, the latest of which was decreed by Sultan Abdulmecid I in 1852.  The terms of the Status Quo remain in place today and guarantee all faiths access to their holy sites. Within the past year, however, increased security measures at al-Aqsa mosque, a legal dispute involving Greek Orthodox properties at Jaffa Gate, and changes in Israeli municipal tax law have raised concerns about the viability of the Status Quo going forward. CMEP advocates policies that respect the religious liberty of all peoples and urges Israeli and Palestinian leaders to ensure the access of Jews, Muslims, and Christians to their holy sites in Jerusalem.

Jerusalem is also the city of two peoples. Both Israelis and Palestinians rightfully regard Jerusalem as central to their national identities. For this reason the 1948 United Nations partition plan set aside Jerusalem to be an international city. However, following the 1948 Arab-Israeli War, the city was divided between Israel and Jordan. The historic Old City–home to the Temple Mount, the Noble Sanctuary, and the Church of the Holy Sepulchre–lay within Jordanian East Jerusalem. The 1967 War saw Israeli forces capture East Jerusalem along with the West Bank, Gaza Strip, Golan Heights, and Sinai Peninsula. In 1980, the government of Israel officially annexed East Jerusalem, a decision that the international community, until President Trump’s December 2017 announcement, has not recognized. During the Oslo Peace Process, Jerusalem was reaffirmed as a “Final Status Issue,” owing to its particularly contentious nature. CMEP believes that the status of Jerusalem must be resolved as part of a comprehensive peace agreement between Israelis and Palestinians and would support the recognition of the Holy City as the capital of both Israeli and Palestinian states.

January 10, 2022: Jewish Worship at the Temple Mount
In order to promote a shared Jerusalem that remains sacred and peaceful for Jews, Christians, and Muslims, CMEP advocates for a strengthening of the Status Quo on the Temple Mount and believes that any changes must be agreed upon by all relevant parties. Without mutual agreement and mediation, such changes will likely exacerbate rising tensions rather than secure authentic religious freedom for all.

March 22, 2018: Status Quo FAQ
Want to know more about the Status Quo in the context of Jerusalem? How does it affect the Christian community? Why is it important for peace? And how have recent events challenged these centuries-old agreements? Learn More

Lent 2018: Pray for the Peace of Jerusalem
Weekly devotionals during the Lenten Season reflecting on the brokenness of this world and the hope of peace that comes through its redemption. Read More

February 2018 Webinar: JerUSAlem: The Holy City in Crisis
Join CMEP’s Executive Director Rev. Dr. Mae Elise Cannon as she interviews three special guests throughout February about the numerous issues related to President Trump’s decision to recognize Jerusalem as Israel’s capital.Three Middle East experts will discuss current realities on the ground in Israel, East Jerusalem, the West Bank, Gaza and the broader area; geopolitical perspectives inherent to the American administration’s recognition of Jerusalem and plan to move the Embassy; and challenges to the peace process that have arisen from their decision. More info available here.

January 31, 2018 Prayers for Peace Blog: Jerusalem: Three Faiths, Two Peoples, One City:
A reflection on the complexity of Jerusalem’s cultural diversity as well as its unity. Can one city be the capital of two nations and a holy pilgrimage site for three faiths while still remaining one? Read More

December 5, 2017: Unilateral Recognition of Jerusalem as Israel’s Capital Constitutes Grave Threat to Future Peace
Churches for Middle East Peace strongly opposes any unilateral recognition of Jerusalem as the capital of Israel and move of the U.S. Embassy without a comprehensive peace agreement between the Israelis and Palestinians. CMEP Executive Director Rev. Dr. Mae Elise Cannon said, “Rather than being a broker for peace, the U.S. will be undermining trust and making the resumption of meaningful negotiations and achieving a viable solution all the more difficult, if not impossible.” Read More

July 21, 2017: CMEP Calls for Preservation of Status Quo and De-escalation of Violence in Jerusalem and West Bank
At least three Palestinians have been killed and more than 300 injured in violent clashes between Palestinians and Israeli security forces in Jerusalem and the West Bank. Three Israelis were stabbed to death with at least two more seriously injured in the West Bank settlement of Halamish. Today’s violence follows a week of escalations that started Friday, July 14 after two Israeli police officers were shot and killed by three Palestinian citizens of Israel outside the entrance to what is known to Muslims as the Haram al-Sharif and to Jews as the Temple Mount in Jerusalem. Churches for Middle East Peace (CMEP) is deeply grieved by the deaths of these Palestinians and Israelis. We condemn all acts of violence and call for a return to the status quo. Read More

The Jerusalem Issue, Explained
Learn why recognizing Jerusalem as Israel’s capital is such a fiercely contested decision. What are the potential consequences of President Trump’s decision and how will it affect regional peace and stability? Read More

Terrestrial Jerusalem
This interactive atlas of Jerusalem allows you to explore historic sites in the Old City, learn about the growth of Jerusalem over the centuries, and investigate how settlements and the separation barrier have changed the character of the city.

What Makes Jerusalem So Holy? [BBC, 2014]
A general introduction to Jerusalem’s sacred landscape, highlighting the significance of the Western Wall, Temple Mount, Noble Sanctuary, and Church of the Holy Sepulcre.

Old City of Jerusalem and its Walls [UNESCO World Heritage Sites]
Jerusalem is one of many sites under consideration for World Heritage Site status by the UNESCO. Proponents note the city’s importance as a place of interchange of human values; its unique testimony to a cultural tradition; and its association with living traditions, ideas, or beliefs of outstanding universal significance.

Christian Holy Sites in Jerusalem
Learn about the Christian heritage of Jerusalem and its place within Christian pilgrimage. This list of shrines in Jerusalem under the protection of the Greek Orthodox Patriarchate details their location and historical significance to Christianity.

The Western Wall
Learn how a retaining wall–the last remnant of the Second Jewish Temple–went from a neglected ruin to the most iconic symbol of Judaism within the last 150 years.

The Temple Mount A Jewish perspective on the importance of the Mt. Moriah as the site of Solomon’s Temple and the Second Temple that was destroyed by the Romans. Includes accounts of many of the historic controversies and conflicts surrounding this sacred site.

Minister for Regional Cooperation Tzachi Hanegbi meets with Holy Land church leaders [10/23/2018]
Minister Hanegbi made clear that the government is committed to ensure every party’s rights are fully protected. The government of Israel has no intention to confiscate church lands or to cause any economic damage to the churches.​​ Read More

Ecumenical Letter to Prime Minister Netanyahu on Jerusalem Municipal Tax [3/13/2018]
The heads of the Evangelical Lutheran Church of America, American (Eastern) Diocese of the Armenian Orthodox Church, the Episcopal Church, and the United States Conference of Catholic Bishops express their “strong concern about recent legal proposals and tax plans that would severely inhibit the work of the churches in and around Jerusalem.” Read More

Statement on Municipal threats and the discriminatory “Church Lands Bill” [2/25/2018]
Churches for Middle East Peace (CMEP) stands in solidarity with the Heads of Communion in Jerusalem and the Christian community living in Israel and the occupied Palestinian territories as they face an unprecedented attack which threatens their very existence in the birthplace of our Christian faith.Read More

The Christmas Message of the Patriarchs and Heads of Local Churches in Jerusalem [12/17/2017]
In their annual Christmas letter, the heads of churches in Jerusalem emphasize the importance of the Status Quo for Christian mission in the Holy Land, “The Christians of the Holy Land, know that their presence and witness is strictly related to the holy sites and their accessibility as places of meeting and encounter for unity between peoples of different faiths. It is the holy places that have given the region a meaning.” Read More

CMEP Coalition Statements on U.S. Recognition of Jerusalem as Israel’s Capital [12/6/2017]
On Wednesday, December 6, 2017 U.S. President Donald Trump recognized Jerusalem as the capital of Israel and announced his intention to begin preparations to move the U.S. Embassy from Tel Aviv to Jerusalem. Churches for Middle East Peace and members of our coalition issued statements expressing their concerns in anticipation of and in response to the President’s December 6 announcement. Read More

Advent Statement by U.S. Christian Leaders in Solidarity with Jerusalem Heads of Churches [12/6/2017]
An ecumenical statement in support of the August 2017 appeal by the Jerusalem Heads of Churches. The signatories stress their concern for religious freedom, free access to Holy Sites for all religions in Israel and Palestine, and reaffirm their vision of a shared, multi-faith Jerusalem for Christians, Jews, and Muslims. Read More

Status of Jerusalem in International Law

UN Resolution 181 [11/29/1947]
As part of the original partition of the British mandate, “The City of Jerusalem shall be established as a corpus separatum under a special international regime and shall be administered by the United Nations. The Trusteeship Council shall be designated to discharge the responsibilities of the Administering Authority on behalf of the United Nations.” Read More

UN Resolution 194 [12/11/1948]
Following the 1948 Arab-Israeli War, “[I]n view of its association with three world religions, the Jerusalem area, including the present municipality of Jerusalem plus the surrounding villages and towns, the most eastern of which shall be Abu Dis; the most southern, Bethlehem; the most western, Ein Karim (including also the built-up area of Motsa); and the most northern, Shu’fat, should be accorded special and separate treatment from the rest of Palestine and should be placed under effective United Nations control.” Read More

UNSC Resolution 252 [1968]
In response to Israeli incorporation of East Jerusalem,“[A]ll legislative and administrative measures and actions taken by Israel, including expropriation of land and properties thereon, which tend to change the legal status of Jerusalem are invalid and cannot change that status; Urgently calls upon Israel to rescind all such measures already taken and to desist forthwith from taking any further action which tends to change the status of Jerusalem.” Read More

UN Resolution 298 [9/25/1971]
“Confirms that all legislative and administrative,including expropriation of land and properties, transfer of populations thereon and legislation aimed at the incorporation of the occupied section are totally invalid and cannot change that status.” Read More

UN General Assembly Emergency Special Session ES-10/L.22 [12/21/2017]
In reaction to President Trump’s recognition of Jerusalem as the capital of Israel, “Stressing that Jerusalem is a final status issue to be resolved through negotiations in line with relevant United Nations resolutions…Demands that all States comply with Security Council resolutions regarding the Holy City of Jerusalem, and not recognize any actions or measures contrary to those resolutions.” Read More