Skip to content
FacebookTweetLinkedInEmailPrint
“Human progress is neither automatic nor inevitable… Every step toward the goal of justice requires sacrifice, suffering, and struggle; the tireless exertions and passionate concern of dedicated individuals.” Martin Luther King, Jr.
In my time here, I have met many incredible individuals who face the impossible realities of occupation. Providing for their communities, families, and yearning for freedom, I am inspired by the power of the individual in the midst of this intractable conflict. 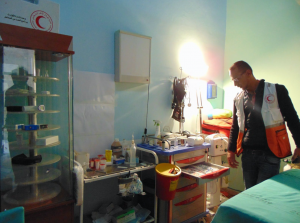 Home to approximately 2,500 people, the village of Qaryut in northern West Bank, is surrounded by the strategically placed ​settlements​ of Shilo (south), Eli (West), and smaller outposts (Adi Ad, Hioval,​ Givat Ariel, and Kida). Suffocated by the settlements,​ the village of Qaryut continually suffers from significant land confiscation and attacks from settlers and Israeli military. Qaryut is also blocked from accessing route 60, the main highway in Palestine that spans 146 miles (235 km) throughout the West Bank and Israel. When Qaryut was initially blocked from the road during the Second Intifada, there were 120 demonstrations protesting the block, resulting in a massive amount of injured residents. Qaryut has been unsuccessful in gaining permission to unblock their access to the road. In the meantime, Eli and Shilo have been constructing a road that connects the two settlements. If completed, this road will permanently isolate Qaryut from route 60, doubling the distance is takes to travel to Ramallah from 27km to 54km (via Za’atara Junction). In total, Qaryut has lost 16,000 dunams (3,954 acres) to land confiscation and settlement expansion. While the road cuts Qaryut off, completion of the road will further the settlements’ long-term goal to have a major road connecting the settlements to Tel-Aviv, impacting all of the surrounding villages.

As an activist and volunteer for the ​Palestine Red Crescent Society​ (PRCS), Bashar Qaryuti has dedicated his life to helping Qaryut and the neighboring villages. Responding to the immediate need for medical treatment during the protests against the roadblock, Bashar began working with the Palestine Red Crescent Society in 2006. Since his involvement, Bashar has been injured seven times and imprisoned four. He is frequently harassed by settlers and soldiers and is known by first name to many of them. During one of our visits to Qaryut, Bashar showed us where Palestinian farmers are frequently harassed and attacked by settlers in the olive groves. Roughly 100 meters above us was a large razor wire fence, many security cameras and loud speakers. A loud voice started speaking at us from the settlement – a security guard who knew Bashar by first name. The guard taunted us, “Hello-yes I see you, smile Bashar, for Facebook!”. The taunting continued as Bashar explained to us that the settlers and soldiers harass him often, including on Facebook with threatening messages. This has not stopped Bashar from serving his community or the surrounding villages as Bashar says, “​When I work for my village, I am happy, I am working for our humanity”​ .

In the field, the PRCS faces an uphill battle. The Israeli military routinely targets first responders and medics, blocking them from administering medical treatment. This is common during demonstrations, where tear gas and rubber bullets are practically guaranteed. Having to navigate the tear-gas filled fields to reach the wounded, they often find themselves on stretchers alongside those they are trying to treat. In addition the PRCS has been stopped from administering treatment all over Palestine (not just at demonstrations), and ambulances are frequently blocked from transporting the wounded. These are direct violations of ​international humanitarian law​ and a breach of medical neutrality. Despite the insurmountable challenges they face, Bashar and his team continue to provide critical medical treatment. Responding to incidents from thirteen different villages, it is his responsibility to respond to every call; this is an around the clock duty, needed at any given hour of the day or night. At midnight on November 29th, 2018, the army performed an incursion on Qaryut, throwing tear gas and sound bombs throughout the village until 2 am. Quick to respond, Bashar and his team pushed through the tear gas ridden streets to provide medical treatment to two families, totalling 15 people, including 3 minors. Due to the constant violence from settlers and the Israeli military, there is a need for PRCS in every village. Bashar has recently started training groups of volunteers in each village, first in Al Mughiyyar, and now in Burin, to be able to treat the large number of injuries.

In order to tend to general health care needs in 2014 the PRCS established a clinic in Qaryut. The “Qaryut Emergency Center”, treats anywhere between 20-40 people a day and more during cold and flu season. Patients pay out of pocket for treatment and since the clinic receives no funding, the doctor and nurse can merely hope for a salary while the medicine itself is provided by the Red Crescent. Bashar showed us the small but capable clinic and shared their plans for building a new clinic. Hopeful to open in one year, this clinic would provide necessary adequate health care to the people of Qaryut and the 13 surrounding villages (roughly 3,000 people in each village). Needing 600,000 USD to build the clinic, it would cover 500 sq. meters and stand two stories high. Funding would provide a pharmacy inside of the clinic and a fibre optic illumination lamp. Bashar says if they receive even half of the funding, they will redesign the clinic and begin to build in order to service the villages as soon as possible. Currently, in order to accommodate the large amount of residents in Qaryut and surrounding villages, students and doctors from the university in Nablus provide “open day clinics” in the local villages but these are not guaranteed.

Outside of the PRCS, Bashar represents the village in court cases against the settlements and has many open cases between the Israeli military and settlers. So far, Bashar has only successfully won a single case, in which 100 dunams (24 acres) confiscated by neighboring settlements Adi Ad and Kida, were returned to a local farmer who can now plow his land. This is a major difficulty of life under occupation and ​land confiscation​ is happening all over the West Bank. The same day the settler security guard called down to us from the speaker, Bashar showed us construction on a soon to be park for families and children of the village. A week later, however, Bashar shared with us that recently Israeli military has been marking the area, and now the people of Qaryut are worried that they will demolish the park.

While inspired by the PRCS and Bashar’s resiliency and dedication to serving their communities under the inconceivable difficulties of life under occupation, I am devastated to witness the continual loss of land and violence inflicted daily upon not only Qaryut, but all of the West Bank. Here, this is “normal”- it is the story of so many villages and families, but there is nothing normal about it.

Hashem,
Bless those who are responding to the plight of humanity and the needs of their communities. I pray that you walk with the people of Palestine and Israel. Please, open our hearts and minds so that we may rise towards peace and justice.
Amen.