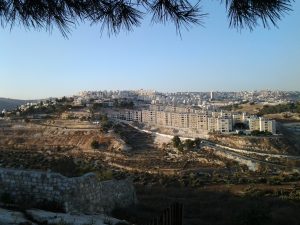 Beginning immediately after Israel’s victory in the Six Day War of 1967, settler groups began constructing illegal outposts in the occupied Palestinian territories (oPt) of East Jerusalem, West Bank, and Gaza. Many of these outposts have grown into the settlements of today. While all attempts to change the demography of occupied territories is illegal under international law, settlements receive Israeli state resources and have recognized municipal governments. Outposts, on the other hand, are established by private individuals without Israeli government approval. Though Israel withdrew 8,000 settlers from Gaza in 2005, the settler population has doubled since 1993. As of 2015, 386,000 settlers are living in the West Bank and 208,000 are living in East Jerusalem. It has been the historic policy of every U.S. administration since 1967 to oppose the existence of settlements and their expansion. Affirming the position taken by the United Nations Human Rights Council, CMEP considers both state-approved settlements and renegade outposts to be illegal under international law in violation of the Fourth Geneva Convention and maintains that their existence and continued expansion impede efforts to establish a comprehensive peace agreement between the state of Israel and the Palestinians (see CMEP Policy Position 4). 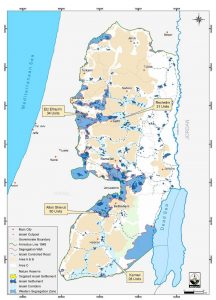 Map of Settlements and Settlement Blocs in the West Bank

How Settlements Impact the Lives of Palestinians

CMEP letter to President Obama on Settlements
“Your administration insists that the only acceptable resolution to this conflict is a two-state solution. Yet, negotiations about territory cannot continue with integrity while one party continues absorbing the territory of the other. We urge your administration, therefore, to make clear that the U.S. views Israeli settlements in occupied Palestine not merely as “illegitimate” and “foolish,” as it has already said, but also “illegal.” Read More

Israeli Settlements in West Bank by Population Size
An interactive map of the West Bank showing Israeli settlements and their respective populations. View

Israeli Settlements in the West Bank by Religiosity
An interactive map of the West Bank classifying Israeli settlements according to their religiosity (Haredi, National Religious, Secular, or mixed) View

Israeli settlements grew on Obama’s watch. They may be poised for a boom on Trump’s [Washington Post, 2017]
“As the parched beige hilltops fill with red-tiled homes, decades of international efforts to achieve a two-state solution are unraveling. And global condemnations notwithstanding, the trend is poised to accelerate.” Read More

Changes in Israel: Background and U.S. Relations in Brief [Every CRS Report, 2018]
This page shows textual changes in the Congressional Research Service’s report on U.S.-Israeli relations between the two versions published in December 2017 and February 2018. Significantly, the 2018 report does not include a section on the impact of Israeli settlements on relations with the United States as the 2017 report does. Read More

The Israeli Committee Against House Demolitions, Mar. 2018]
“February has seen widespread demolitions and confiscations in the occupied West Bank (including East Jerusalem) with Israeli authorities demolishing 37 structures, displacing 44 people, including 24 children, and affecting a further 211 people…In the Naqab desert, South Israel, the unrecognized Bedouin village Al Araqib was demolished for the 125th time, and in Lod, central Israel a house was demolished displacing a family. All the incidents occurred on the grounds of lack of an Israeli-issued building permit.” Read More

Acting the Landlord: Israel’s Policy in Area C, West Bank [B’tselem, 2013]
A report on Israeli administrative policies in Area C of the West Bank with a specific focus on settlement expansion, housing demolitions, and Palestinian displacement in the South Hebron Hills, Jordan Valley, and in the vicinity of Ma’ale Adumin. Read More

UNSCR 446 (March 22, 1979)
“Calls once more upon Israel, as the occupying power, to scrupulously abide by the Fourth Geneva Convention…And in particular not to transfer parts of its own population into the occupied Arab territories.” Read More

UNSCR 452 (July 20, 1979)
“Calls upon the government and people of Israel to cease, on an urgent basis, the establishment, construction, and planning of settlements in Arab territories occupied since 1967, including Jerusalem.” Read More

UNSCR 465 (March 1, 1980)
“Calls upon all States not to provide Israel with any assistance to be used specifically in connection with settlements in occupied territories.” Read More

UNSCR 471 (June 5, 1980)
“Calls again upon Israel to respect and comply with the provisions of the Fourth Geneva Convention…as well as the relevant resolutions of the Security Council. Calls again upon States not to provide Israel with any assistance to be used specifically in connection with settlements in occupied territories.” Read More

UNSCR 476 (June 30, 1980)
“Reaffirms that all legislative and administrative actions taken by Israel, the occupying power, which purport to alter the status of the Holy City of Jerusalem have no legal validity and constitute a flagrant violation of the Fourth Geneva Convention…” Read More

Statements from U.S. Government Officials
Every U.S. president since Jimmy Carter has expressed varying degrees of opposition to Israeli settlement expansion, but in practice, none has taken concrete measures to ensure a cessation of building in West Bank and East Jerusalem. Read More