Water Insecurity in Israel and the occupied Palestinian territories (oPt)

The iconic black water tanks on Palestinian roofs are the most visible symbol of the Palestinian water insecurity. These tanks store water in homes, many of which aren’t connected to public water mains. As of 2015, the water available for Palestinians in the West Bank and Gaza is well below the World Health Organization’s recommended 100 liters per person per day. Palestinians in the West Bank only have on average access to 83.4 liters of water per person per day and over 30,000 people don’t have running water in their homes. The situation is even worse in Gaza where per capita daily consumption is only 58.7 liters and 100,000 people are without running water. The water sharing agreements established in the Oslo Agreement of 1995 and the aftermath of the 2014 Gaza War explain these shortage.

Under the terms of the Oslo Agreement of 1995, Israel retained access to 483 million cubic meters of water per year or 80 percent of the water pumped from existing wells in the West Bank. This means that Israelis who live in illegal West Bank settlements have access to 367.1 liters of water per day, or more than four times the Palestinian consumption. The Oslo terms were meant to be temporary, lasting only five years. But with no final peace in sight, these terms prioritize the needs of expanding Israeli settlements over the needs of Palestinian villages. 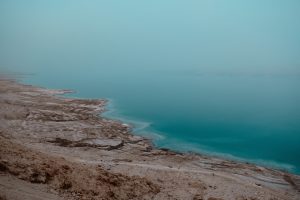 Water scarcity is an even worse problem in Gaza. Since the 2014 Operation Protective Edge, 92 percent of the coastal aquifer has been unsafe to drink. Unlike the West Bank, Gazans can resort to desalinated water from the Mediterranean Sea, but this has become contaminated by sewage and other runoff. Israel’s municipal water corporation sells Gazans about 10 percent of their daily water consumption.

Churches for Middle East Peace encourages needs and rights based development to reduce inequality and promote human dignity, especially in the West Bank and Gaza.

A land without water: the scramble to keep Jordan from running dry, Nature, September 2019 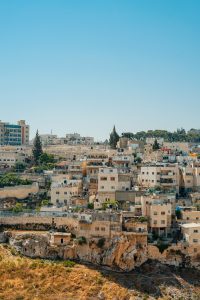 , Ecopeace, 2017
“Israel and Palestine have access to the Mediterranean, and thus, relatively easy access to desalination, but have relatively little open spaces necessary for large scale renewable energy facilities; whereas Jordan’s access to the sea is far from its population centers, but it has a relatively large amount of unpopulated spaces that are very suitable for producing renewable energy, particularly solar. This report presents a pre-feasibility study of an initiative for water-energy exchanges between Israel, Jordan and Palestine as a means of addressing water and energy needs in an economically efficient and environmentally sound manner.” Read More

National Water Policy for Palestine, Palestinian Water Authority, 2013
“Despite the limited water resources available and the importance of water to a healthy future, there have been instances where the value of water has been overlooked. The sustainable management of water resources does not offer easy solutions as the country is suffering from water scarcity, as Israel is hindering Palestinian access to natural water resources. Thus, legal and administrative measures need to be continually updated based on a plan developed from a strategy, which is in turn the expression of a national water policy.” Read More 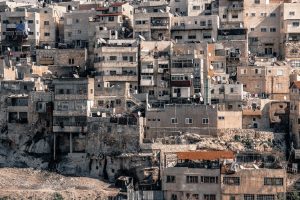 Jordan Water Sector Facts and Figures, Ministry of Water and Irrigation, 2015
“Jordan suffers from water scarcity, which poses a threat that would affect all sectors that depend on the availability of water for the sustainability of activities for their development and prosperity.” Read More