Amidst the daily realities of living under occupation, as the threat of demolition of homes and property hangs in the air, there are inspiring individuals and communities committed to peace. One example of such is peacemaker Tariq Hathaleen (24 years old), a Palestinian student who is working to finish his degree in English Education at a university in Hebron. Tariq is from Um El Kheir, a Bedouin Village in the South Hebron Hills, which is surrounded by a neighboring Israeli settlement, Carmel. Despite harassment by Carmel’s inhabitants, Tariq is committed to peace over hatred. He pursues further growth and development to serve his people in the interest of peace as his village continues to survive against all the odds. Churches for Middle East Peace (CMEP) is continually inspired by the work of young activists like Tariq as we continue to pursue a just peace for all living in the region.

Um El Kheir (meaning Mother of Good) is a small Palestinian Bedouin village home to more than one hundred people and two dozen families. According to the story of the village, the Al 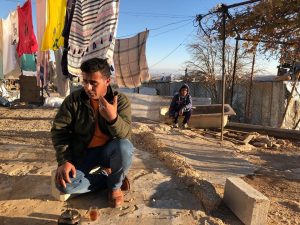 Jahaleen tribe acquired the land from residents of the nearby town of Yata with 100 camels (accumulated over time between 1959-1969), and residents of the village have lived there for over 60 years. In 1983, the Israeli military established an outpost and army camp near Um El Kheir, which is now the settlement of Carmel with a population of over 400 people. The settlement is a gated community that tightly encroaches on the village and has access to many resources provided by the Israeli government, including the national bus system that services transportation to and from the settlements into Israel. Um El Kheir is located in Area C (from the Oslo Accord, which divided the land into three areas) and is under Israeli civil and security control, but receives no direct services. The roads in Um El Kheir are dug by hand and the villagers suffer from the continual threat of demolition of homes and property.

The orders for demolition are based on Article 38 of the Towns, Villages and Buildings Planning Law, which states:  “If the local committee or the district planning committee discovers that the construction of any land [sic] or the construction of a building is being executed without a permit or contrary to what a permit stipulates or contrary to valid regulations, orders and directives, or contrary to any approved planning and/or construction project, the relevant committee or its chairman, or any official authorized to act in its name, shall issue an operative warning against the owner, the contractor, the possessor and the foreman …. In particular, the warning shall contain a demand to remove, demolish or change the building or work or to desist from using the said land and to desist from further construction activity.”

Though the village is situated on private land recognized by the Supreme Court, they are not permitted to build. They’ve requested a master plan for construction, but Supreme Court continually denies them permission. Though the orders are not frequently carried out, the threat still remains: all but one building built in 1977 have demolition orders against them. Tariq’s family experienced these issues firsthand when, in January 2012, Tariq’s mother’s house was demolished. These demolitions force villagers to construct tents, which do not protect from the hot sun or cold winters and cannot withstand snow, leaving the tents to collapse.

Along with these economic and infrastructural challenges, on several occasions the Israeli settlers have harassed residents by throwing stones at tents where villagers sleep and yelling insults through the settlement’s barrier fence. According to Ta’ayush (a grassroots movement of Arabs and Jews working together to address the realities on the ground) in September 2016, settlers harassed residents of the village; “…settlers from Carmel have been throwing stones at the Palestinian village, disturbing the sleep and disrupting the lives of the men, women, and children there. Neither the Israeli police, the army, nor the security coordinators of the settlement have done anything to prevent the stone-throwing, despite a complaint that was filed to the police and repeated notifications by the residents of Umm al-Kheir to all of the above-mentioned Israel bodies about the continuous incidents.”

Settlers have also obstructed access to livestock in the village, which are an important aspect of the villager’s livelihood. Due to the proximity of Carmel to Um El Kheir, animals wander and graze, leading to tension between Palestinian villagers and neighboring settlements. While speaking with Tariq, he tells the story of his brother, who was shot at while attempting to herd his goats, forcing him to return home. Later, a security guard from Carmel came to the village and beat him until he collapsed, stating, “I will give you in this community a handicapped person.” The encounter left him with severe brain damage and the loss of 80% of his memory. He is now significantly disabled.

In a similar incident, a donkey wandered into the a fenced off area of settlement where razor wire which was put up so the animals could go inside. Tariq recounted that while attempting to retrieve the donkey, his stepmother was shot in the back. A resident of Carmel claimed that she went inside the settlement with the intent to commit a terrorist attack. When Israeli police arrived, she was arrested and taken to the police station, leaving the donkey still in the settlement. She was released in Hebron early the next morning and was escorted back to the community by one of the other bedouins from the village. Eventually someone from the Um El Kheir went back into the settlement to get the donkey.

Tariq expressed; “The world has to hear our stories…”

Many other obstacles impact the villager’s livestock, such as lack of access to fields which were taken over by neighboring settlements and lack of water, as the villagers are not permitted to use the Israeli system that supplies the settlements with water.

Despite facing the threat of demolition, lack of access to resources and harassment from settlers,  the village of Um El Kheir and extraordinary individuals such as Tariq Hathaleen continue to persevere and survive in the midst of conflict. As we work towards justice and peace in the Holy Land for all of its inhabitants, we invite you to advocate for the protection of villages like Um El Kheir by partnering with organizations like Churches for Middle East Peace.

We pray for Israelis and Palestinians and all people living in conflict. Bless those who continually strive for peace and justice in their communities. We pray for the villagers of Um El Kheir. Strengthen them as they face tribulation and give them hope even in the midst of conflict. We pray that you would guide us and teach us to diligently pursue peace and work for justice as we are inspired and called to action by young activists like Tariq.