This past Thursday, a few of the Jerusalem/West Bank Young Adults in Global Mission (JWB YAGM) and I were invited to gather at the Tent of Nations, a 100 acre farm just outside Bethlehem owned by the Nassar family. That night, the family received the 2017 World Methodist Peace Award, honoring their creativity, consistency, and courage in peacemaking and non-violent resistance. 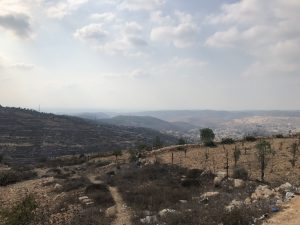 A view of the Judean Hills from the Tent of Nations

The 100 acres of land that comprises the Tent of Nations farm was purchased by the Nassar family in 1916 and since then has been used to grow grapes, olives, almonds, and many other crops. The land remained in the Nassar family’s possession throughout the rule of the Ottomans, the British, and the Israelis. In 1991, however, the Israeli government declared the Nassar farm and the land surrounding it “Israeli State Land,” and began their efforts to confiscate the land. Since then, the family has continuously struggled to maintain possession of their familial land. (You can read more about their legal struggles here.) Today, the farm is surrounded by the Gush Etzion Settlement Bloc. You can see Israeli settlements from almost every vista on the farm. According to the Geneva Convention and the United Nations, these settlements were built in contradiction to international law.

The Nassar family, however, has not given up. They are guided by several principles: they refuse to flee. They refuse to hate. They refuse to be enemies. They channel their pain and suffering into positive actions as a result of their Christian faith. Today, the Tent of Nations hosts many international volunteers, a summer children’s camp, and a women’s empowerment project, in addition to continuing to cultivate the organic farm and move towards self-sustainability.

As my friend and fellow YAGM Katie and I arrived at the farm, we were immediately swept into preparations for the ceremony: decorating tables, arranging gingersnap cookies, and receiving instructions for where all of the food would go when it was time for dinner. Eventually, all that was left to do was wait, so we walked around the farm, saying hi to the multitude of dogs and even spotting a donkey. We also had conversations with many of the Nassars about the meaning of the land and their dedication to caring for it despite the hardships they face. I am astounded by their faith and the work they are doing to improve the community. 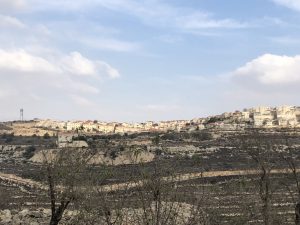 An Israeli Settlement visible from the Tent of Nations

As more and more people arrived, we gathered at Solomon’s Theater on the edge of the farm for the ceremony at which the Nassar

Many members of the Nassar family spoke, as did many religious leaders from the World Methodist Council. At one point, Archbishop Emeritus Elias Chacour of the Melkite Greek Catholic Church stood to speak at the podium. He is an elderly man now, dressed in black with an impressive golden cross and an even more impressive beard. Framed both by the glorious beauty of the terraced land and the looming Israeli settlement, complete with a tall tower bedecked with a massive Israeli flag, he began to speak in a quiet voice.

Abouna (literally, ‘Our Father,’ a term for priests and holy men) Chacour, another recipient of the World Methodist Peace Award and three-time nominee for the Nobel Peace Prize, shared his experiences as a young man, dispossessed of his land and his identity, forced to flee from his home as a refugee. He spoke of his work to grow peace, understanding, and non-violent resistance in the Holy Land. He asked if it was okay for him to speak in Arabic, and in his native tongue shared the Biblical story of King Ahab – an unjust ruler who killed a local vineyard keeper and took possession of his land. The choice to share this particular story did not seem accidental. 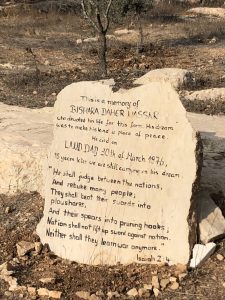 “This is a memory of Bishara Daher Nassar, who dedicated his life for this farm. His dream was to make his land a place of peace. He died on Land Day 30th of March, 1976; 35 years later we are still carrying on his dream. ‘He shall judge between the nations, and rebuke many people; they shall beat their swords into plowshares, and their spears into pruning hooks; nation shall not lift up sword against nation. Neither shall they learn war anymore.’ Isaiah 2:4”

After sharing the story of King Ahab in Arabic, Archbishop Chacour looked towards the internationals in the crowd. “Are any of you American?” he asked. A number of us raised our hands. “Oh good!” he exclaimed, “I love Americans! I have visited America and you are some of the kindest, most beautiful people in the world.” There was a chuckle, a brief pause. “But,” he continued, “I do not see this beauty in your foreign policy. I do not see this kindness reflected in your leaders.” This time the pause was more subdued.

So I sat, the weight of my American power and privilege and all its oft-ugly history heavy on my shoulders. What can I possibly do, amid all this fraught history?

“Do not be silent,” Abouna Chacour said, as though he could hear my question. “Listen to the stories we tell you. Come and see what the Palestinian experience is. Tell these stories you hear to others. Tell the truth. Do not stop speaking. When I was a young man, I could yell against injustice. Now, I cannot. Speak out and tell the people what is happening here.”

I’ll admit that I have really struggled with how to share the stories that have been shared with me. I do not yet feel qualified to speak, and perhaps I never will. I am still learning how to hold these stories sacred, how to sit shoulder to shoulder with my companions. How do you react when someone tells you they’ve been arrested, beaten by Israeli soldiers? What do you say to a new friend who tells you they were attacked by Israeli settlers at a checkpoint? What is the proper response to all of the stories of injustice here? Then, how do you share these stories with the proper deference to their origins? These stories are not mine, after all, and my privilege sits in my throat like a large, ugly burr.

I still do not know the answers to these questions. But I also have Abouna Elias Chacour’s words ringing in my ears: Do not be silent.

So that, I suppose, is what I have to do. To the best of my ability, I will share these sacred stories I hear and amplify the voices of my companions.

I will not be silent.

Heavenly Father,
We thank you for the work that Hannah and her peers in the Young Adults in Global Mission (YAGM) program are doing. We pray for the continued willingness of individuals willing to step outside of their comfort zone and live alongside and within uncomfortable situations. Thank you for giving Hannah and others the courage to not be silent in the face of injustice.
Amen.

You can read more about Tent of Nations in our Prayers for Peace (P4P) posts here and here.