It is interesting how Palm Sunday is often described as Jesus’ triumphal entry into Jerusalem. And yet, what was triumphant about this humble Jewish man riding down the Mount of Olives, across the Valley of Kidron, and into the Old City of Jerusalem? The people cried out adulations to him, but the praise of humankind was temporary and fleeting. For in the days hence, that very same crowd would turn their backs on Christ and instead release the convicted prisoner Barabas into freedom. How could Jesus ever be reconciled to his people after such betrayal?

Today the walk down the Mount of Olives is a glimpse of the multi-faceted diversity of cultures and Abrahamic faith traditions that call Jerusalem holy. It is also a microcosm of the contestations about land, historic ties to the Old City of Jerusalem, and the current political realities of the Israeli-Palestinian conflict.

The sacred site of Jewish graves covers much of the face of the Mount of Olives today, said by some to be the most ancient and important Jewish cemetery in Jerusalem. This cemetery is the burial ground of tens of thousands of Jews who desired to be buried in the holy soil of Jerusalem. However, in the past several years, this burial ground has been repeatedly vandalized and often desecrated.

If one continues on the path down the mountain, one will see the historic Christian holy sites of Dominus Flavit, where Jesus wept and the Garden of Gethsemane, where Jesus spent his last night in prayer and grief before being betrayed. For Christians, the Mount of Olives also holds spiritual significance. 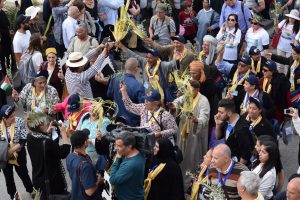 After traversing the valley of Kidron and heading back up the opposite hillside to the Sheep’s Gate and the Temple Mount, there is also a Muslim cemetery. At the foot of the Golden Gate, where Jews believe one day the Messiah will enter into Jerusalem, there is a Muslim cemetery. Tradition has it that Suleiman the Magnificent had the gate sealed to prevent entry by the “false messiah” until the true one might come.

Here in the sacred city of Jerusalem, these three Abrahamic traditions, each deeply rooted in the history, culture, and religiosity of the Holy City maintain their presence. As we reflect today on Jesus’ triumphal entry – and all that was hidden beneath the surface by the very people who would soon betray him – may we gain greater insight on what it might mean to pursue principled indifference. Holding in tension the willingness to honor the multi-faceted and multi-narrative histories of the sacred city, while also not compromising on our principled pursuit of justice, equality, and human rights for all of the people of Jerusalem. May this be our prayer on this sacred holiday of Palm Sunday in our quest for persistent hope for Jews, Christians, and Muslims in Jerusalem and around the world.

Join us in these interfaith prayers for peace from the U.S. Conference of Catholic Bishops:

O God Source of Life, Creator of Peace. . .
Help Your children, anguished and confused, To understand the futility of hatred and violence And grant them the ability to stretch across Political, religious and national boundaries
So they may confront horror and fear
By continuing together
In the search for justice, peace and truth. . . . With every fiber of our being
We beg You, O God,
To help us not to fail nor falter. Amen

Lord God, we turn to you in these trying hours when
conflict is a daily reality for our sisters and brothers
in Israel and Palestine. We promise you to work to our utmost for peace and reconciliation in the region. But we know we cannot do it alone. We very much need the strength of your presence in our midst if we are to overcome the obstacles before us. So our prayer at this moment is that
you add your support to our efforts, that you show yourself as a tower of strength in those moments when the barriers seem impassable. Together we can become beacons of hope for just and peaceful societies in the land so very dear
to the peoples of your covenant. Amen.

In the Name of God, The Everlasting Merciful, The Cherisher
Of the Worlds and Worthy of all Praise,
Our Lord: You have created us from a single (pair) of a male
And a female and made us into Nations and Tribes that we may Know one another (not that we may despise each other) so
Help us to love each other and take the hatred and anger from our Hearts so that the People of The Book (Christians, Jews and Muslims) In the Middle East may live in Peace and Justice. Amen

Join us in prayer by typing your prayers in the comment section below.