All over the world this evening, churches throughout the east and the west will host services to celebrate Maundy Thursday. The Thursday of Holy Week reminds believers of the Last Supper Jesus had with the disciples, and more specifically, his teaching them about the power of what it means to be a servant.

Jesus knew what was to come. He had loved the disciples and the world while he lived amongst them and John 13:1 tells us he “loved them to the end.” Christ’s ultimate act of love would follow a few short days after the meal, but his lessons for those who followed him were not yet complete.

Judas Iscariot had already decided to betray Jesus. Moreover, Christ knew what was to come. The Scriptures remind us that Jesus knew “all things were in his power” and that he had come from God and was returning to God (John 13:3).

My favorite part of this passage recounts the interaction between Jesus and Peter. As the meal progressed, Jesus got up, removed his outer clothing, and placed a towel around him. I think of this often when at the holy sites by the Lake of Gennesaret (the Sea of Galilee) where Peter so often encountered Jesus later on in the story. The following conversation ensued between Peter and Jesus (John 13:6-10):

He [Jesus] came to Simon Peter, who said to him, “Lord, are you going to wash my feet?” 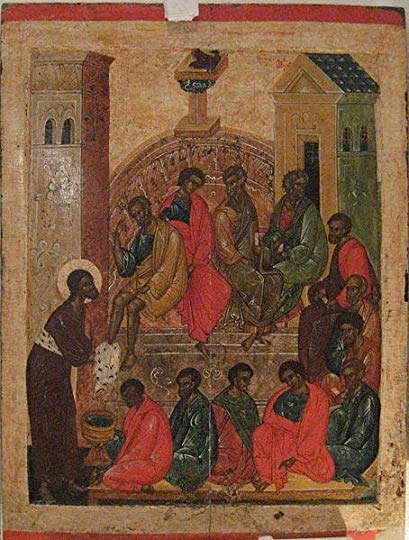 Jesus replied, “You do not realize now what I am doing, but later you will understand.”

Jesus answered, “Unless I wash you, you have no part with me.”

“Then, Lord,” Simon Peter replied, “not just my feet but my hands and my head as well!”

Jesus answered, “Those who have had a bath need only to wash their feet; their whole body is clean. And you are clean, though not every one of you.” For he knew who was going to betray him, and that was why he said not every one was clean.

What an incredibly powerful picture. Bold, proud, stubborn, determined Peter. “No, Lord… you shall never wash my feet.” I can see his defiance and resistance. Of course, Peter would never allow Christ the Savior to humble himself to such a degree.

Jesus’ actions of washing the disciples’ feet was an ultimate act of humility and servanthood. He wanted the disciples to follow his example and to be servants to the world, just as he served them in the simple act of washing their feet.

Christ gently responds to Peter’s reticence… “unless you allow me… you will have no part with me…” Peter – chastised and perhaps ashamed – unabashedly responds – I can see him wholeheartedly and with great exuberance replying “then not only my feet but wash every part of me” – the indication of these words imply Peter’s deeply passionate commitment to Jesus. The thought of not being “with him” was too much to bear – Peter desired to be completely intimate and close to Christ. The symbol of desiring his whole body to be washed represents Peter’s intentionality in being fully devoted to Jesus.

The cleanliness Jesus discussed was more than that of dirt simply being removed from the feet of his disciples. Rather, Christ spoke of cleanliness synonymous with purity of spirit. He spoke of “not everyone” being clean because he knew already that Judas would betray him.

As with Peter, Jesus invites us to experience the forgiveness of having our whole bodies cleansed. His act of service – first exemplified in the washing of feet and later profoundly expressed in his death on the cross – is an invitation.

Join us in this litany from the United Methodist Church for use during Maundy Thursday services**:

Most merciful God,
we your Church confess
that often our spirit has not been that of Christ.
Where we have failed to love one another as he loves us,
where we have pledged loyalty to him with our lips
and then betrayed, deserted, or denied him,
forgive us, we pray;
and by your Spirit make us faithful in every time of trial;
through Jesus Christ our Lord. Amen.
Who is in a position to condemn? Only Christ.
But Christ suffered and died for us,
was raised from the dead and ascended on high for us,
and continues to intercede for us.
Believe the good news:
In the name of Jesus Christ, you are forgiven!
In the name of Jesus Christ, you are forgiven!
Glory to God. Amen.

*This post is from a previous personal blog written on March 28, 2013.
** Bold texts are typically read in unison. Source.