These are examples of the questions asked by thousands of people who turn to the work Jessica Montell does at HaMoked each year. Since September of 2017, Montell has served as Executive Director of the human rights NGO HaMoked, which assists Palestinians living under the Israeli occupation, and the severe and ongoing violations of rights occupation causes. The organization provides free legal aid, works to change government and military policy, and upholds universal human rights principles.

HaMoked was originally founded in 1988 following the first intifada or “uprising,” focused on helping injured Palestinians as a result of a “broken bones” policy which Israeli carried out among demonstrators. Increasingly, Palestinians turned to HaMoked with other complaints, leading the organization to expand its activities to handle human rights violations in several spheres. Over the last thirty years, HaMoked has assisted over 100,000 people, many of whom have nowhere else to turn.

The team Jessica manages consists of 30 Jewish Israeli and Palestinian staff members, among them complaint receivers who maintain direct contact with the complainants, client-advocacy staff responsible for communicating with the authorities, and tracking the progress in handling the complaints, a legal team, as well as others doing research, record and data maintenance and more. Even when some cases seem hopeless, HaMoked is committed to raising a principled voice and leaving no stone unturned in its efforts to seek relief. 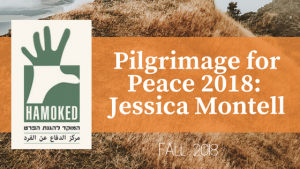 A majority of HaMoked’s cases are, in fact, resolved successfully:

They say their high success rates indicate the arbitrary nature of the denial of rights – and the importance of their work.

For twenty years, Jessica has been a leading figure in the Israeli human rights community which began at HaMoked so many years ago. Originally from California, her love of Israel early in life led to a gap year program with Berkeley Young Judea when she was just 17 years old. That experience propelled her to go again after college where she interned through HaMoked. After earning a Master’s in International Affairs with a focus on human rights at Columbia University, she landed a job with B’Tselem, the Israeli Information Center for Human Rights in the Occupied Territories. After three years of work, she became the Executive Director and remained in that position until 2014.

Ms. Montell has worked at various Israeli social justice organizations, including the Israel Women’s Network and served as a consultant to the US-based Lawyers Committee for Human (now Human Rights First). She had a year-long fellowship with the Swedish Consulate in Jerusalem where she analyzed the impact of the Israeli human rights organizations and presented before the human rights committee in Israel. In 2016, she became the director of an Israel-Diaspora partnership called Save Israel, Stop the Occupation, “SISO.” During her tenure there, the organization and their partners recruited 40 organizations into a 50-Out network to stimulate discourse, raise public awareness and to amplify, coordinate and publicize events about the Jubilee anniversary of the occupation.

Jessica also writes regularly for the Jerusalem Post, contributes to OpenDemocracy, and is a frequent speaker and commentator on human rights, international humanitarian law, and counter-terror policies. She has won multiple awards for her work: Named as one of “the 50 most influential women in Israel for 2007,” by TheMarker newspaper, she was selected by Ha’aretz as one of 2011’s “10 most influential Anglo immigrants,” and the UK-based Action on Armed Violence selected her as one of the 100 most influential people working to make the world a safer place in 2013.

Jessica will be with Churches for Middle East Peace (CMEP) during our October 2018 Pilgrimage to Peace (P2P) speaking tour, visiting churches, schools, community groups, and other religious organizations throughout the United States. Join us to learn what it means to be someone who pursues peace while advocating for justice in the Israeli-Palestinian conflict and beyond.

God, we thank you for our sister, Jessica, and the work that she and many Israelis have committed their lives to. Through their dedication, we have continued hope for a just peace in the Holy Land.  We ask as she defends and works to uphold the rights of others, that your hand of blessing and grace be upon her. We ask for the bridge of reconciliation to extend beyond social justice organizations and continue into the streets among Israelis and Palestinians so that your people will know peace. Help us as we seek ways to support them and actively pursue peacemaking in our own actions as well. Amen.

You can meet and learn from Jessica in October during Churches for Middle East Peace’s Fall 2018 Pilgrimage to Peace Tour. Learn more.

Celia is a volunteer with the CMEP Communication team. After returning from a 2011, dual-narrative trip to the Holy Land, Celia searched for ways to become involved with advocacy. For three years, she led teams from National Community Church to Bethlehem to learn from organizations and local peacemakers that pursue justice and reconciliation. Upon return, she connected team members to CMEP’s advocacy work and approach to holistic policy. CMEP is very thankful for the writers who contribute to our Prayers for Peace blog. However, CMEP does not necessarily agree with all the positions of our writers, and they do not speak on CMEP’s behalf.