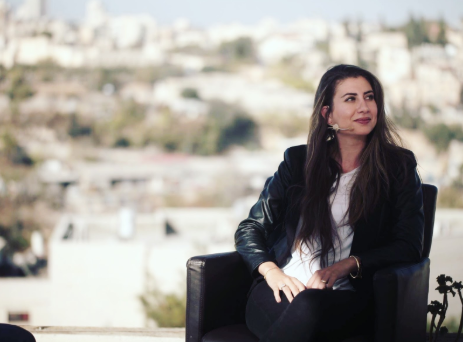 If you were aware that there was an issue in your society regarding the arrest and detention of children, how would you respond? Palestinian human rights lawyer, Farah Bayadsi, has decided that this is a critical issue she cannot walk away from. Growing up near Haifa in a town called Baqa al-Gharbiyye, Farah grew up a citizen of Israel with Arabic as her mother tongue. She studied for her Bachelor of Law degree at Shaarei Mishpat College in Hod Hasharon near Tel Aviv, where she became aware of the growing gap between the theoretical aspect of law and its application; that what is on paper is not necessarily what is practiced, especially regarding criminal law and political arrest cases. This led her to move to Jerusalem to pursue her LLM in International Law and Human Rights at Hebrew University.

She became involved in working in the Israeli courts as a translator from Hebrew to Arabic for Palestinian political prisoners, utilizing her Hebrew as a way to serve those within the Israeli prison system who are often disadvantaged due to inadequate representation. She served in this capacity for over six months, until the 2014 war between Israel and Gaza, known by Israelis as Operation Protective Edge. It was through learning about the course of events which led to the war, including the high casualty rate among children in Gaza, which prompted Farah to transition from translating to actively practicing law and seeking to represent the underrepresented in Israeli courts.

She began working as a lawyer for the Addameer-Prisoner Support and Human Rights Organization, where she addressed the legal inequalities within the Israeli court system and under the Israeli military occupation of the West Bank. Since 2014, Farah has tackled cases within the Israeli civil and military court involving political arrests, administrative detention, hunger strikes by Palestinian prisoners in Israeli prisons, and addressed legal inequalities between Israeli citizens and Palestinian residents of East Jerusalem and the West Bank. Through this work, she became exposed to dire conditions within these prisons and the recurring discrepancy between the law in the books and its application. In this vein, the issue of the arrest and detention of Palestinian minors has resonated significantly with Farah.

After two years of learning the complexities of the Israeli legal system from the unique lens of a female Palestinian lawyer and Israeli citizen representing Palestinian citizens, Farah was contacted by Defense for Children International to address human rights violations of Palestinian minors and serve as their advocate. Farah now specializes in defending juveniles and addressing the plight many of them face as they come of age within the Israeli prison system. In this role, says Farah, she serves the children she represents not only as their lawyer but also as a maternal figure and psychological support network. She has become part of her client’s lives during a particularly sensitive time of their development. Her first client, she remembers, grew his first facial hair while serving time in prison.

Farah is currently writing her thesis on the detention of Palestinian minors in East Jerusalem and the application of the law regarding their trial procedure. When applied to Palestinian minors, the law adopts a different form, which permits children to be arrested in emotionally and physically traumatizing ways which renders them alone and physically vulnerable. One client Farah recently represented was violently handled by a large group of Israeli soldiers, who broke his shoulder while arresting him. It was not until two weeks after the child had been in prison, however, that this injury was discovered and addressed upon his release on bail.

Farah’s mission is to raise awareness around the injustices of the Israeli military court, which all minor and adult prisoners from the West Bank are tried under. It is not logical, says Farah, to expect justice to be served when the court implements a double-standard and gives different faces to the same coin. For example, if two 16-year-old Israeli and Palestinian boys are arrested for throwing stones, the Palestinian boy will be tried under the Israeli military court, while the Israeli boy would be tried under Israeli civilian law, garnering two vastly different outcomes.

Farah’s work focuses on the arrest and transport of Palestinian minors to prison, as well as the interrogation they undergo upon arrival. Whether a child’s arrest process lasts one hour or three days, says Farah, the psychological trauma each child experiences is endless, and an experience they will never forget. Beginning from their experience of arrest, which typically involves a home raid in the middle of the night, a time in which a family is rendered most vulnerable, the child and his/her family experience trauma. The process of each arrest and the interrogation that follows, says Farah, is meant to frighten the child and coerce them into a confession. This method is indicative of the brokenness of the system; for instead of seeking the truth to achieve justice, it is a means of control.

This experience writes a new narrative for each child – one in which they are categorized as criminals and instills within them a fear of arrest and post-traumatic stress disorder. They are caught within a system run by the military, with the translator, prosecutor, and judge all part of the military court system. It is not designed, says Farah, to protect the rights of the child or their families. Each arrest and detention signifies missed school and missed opportunities for healthy personal development during the highly formative time of adolescence.

The constant reminder that each child represents the future generation serves as motivation for Farah to continue to pursue her work, which is a daily emotional challenge. They are the future leaders of the future state of Palestine, she says, and it is critical to support them and their future as much as possible. If that means that she will serve not only as their lawyer, but also fill the role of a translator, mother figure, and psychologist for each of her clients as well, then she is prepared to do that. The constant question of, “If I am not here filling this role, then who will be?” is one which she continually asks herself.

Farah is determined not to walk away from people in need, especially when they are children in their critical years of physical and emotional development. It is important for her to remain continually engaged in addressing the gap between the theory and practice of Israeli law, being mindful of the fact that her goal for each client is not ultimately getting released on bail, but living within a society in which the threat of arrest and detention as a child is no longer a possibility. It is not enough, to measure legal victory by the release of her clients from prison, for that short-term goal only addresses the immediate problem. It is possible to work for a goal beyond each arrest, and it starts with getting to the facts and fostering growth in the discussion regarding human rights issues within Israeli society. Every Palestinian child’s life depends on it.