Yemen is a relatively new country within the political landscape of the Middle East that has faced enormous economic and political challenges since its unification in 1990. 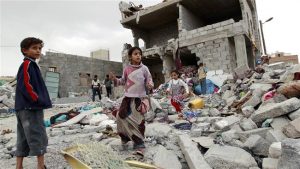 Yemeni children outside house destroyed by bombing (Photo by AFP)

Before 1990, what is today Yemen was divided between the Yemen Arab Republic in the north and the People’s Democratic Republic of Yemen in the south. The causes of the current civil war–which the World Health Organization, the World Food Program, and UNICEF characterized in 2017 as “world’s largest humanitarian crisis”–largely stem from unresolved issues dating back to the country’s unification. Post-unification Yemen was marked by a massive disparity in income between populous north and impoverished, sparsely populated south. Tensions between the Saudi-supported Salafi religious movement and the Shia Muslim minority in the north have also increased in past decade. Separatist movements in southern Yemen and the Shia Muslim Houthi militias in the north seek to remedy these perceived injustices. In 2014, both of these groups revolted against the government of President Abd Rabbuh Mansur Hadi, who came to power after Arab Spring in 2011. 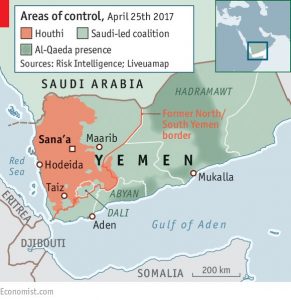 Map of Yemen Showing Areas Controlled by Houthis and Saudi-coalition (Source: the Economist)

The civil war in Yemen has increasingly taken on an international dimension. Saudi Arabia and most of the Gulf Cooperation Council backs President Hadi’s regime, the United Arab Emirates (UAE) supports the southern separatists, while Iran has contributed some limited military support for the Houthis in the north. The Saudi-backed coalition has carried out widespread bombing campaigns in Houthi-controlled areas. As the civil war in Yemen has increasingly been depicted as a proxy war between Saudi Arabia and Iran, the United States has taken a strategic interest in the conflict. The Obama Administration agreed in March 2015 to provide the Saudi military with intelligence sharing, air-to-air refueling, and logistics support in Yemen in exchange for Saudi support for the Iran Nuclear Deal. In September 2017, the United Nations sent a prominent team of international law experts to Yemen to investigate reports of Saudi war crimes. CMEP urges the U.S. to support human rights, humanitarian assistance, and ‘encourage negotiated, just and peaceful resolutions to conflicts in the region.’ Nowhere in the world is there a catastrophe today where so many lives could be saved by the U.S. adopting this course of action.

S.J. Res. 54: A Joint Resolution to Direct the Removal of United States Armed Forces from Hostilities in the Republic of Yemen That Have Not Been Authorized by Congress.
A bipartisan joint resolution sponsored by senators Bernie Sanders (VT-I), Mike Lee (UT-R), and Chris Murphy (CT-D) calling on the President to remove U.S. Armed Forces from hostilities in or affecting Yemen unless Congress formally declares war or authorizes the special use of armed forces.

55 Organizations Call on Senators to Support S.J.Res. 54 and End America’s Shameful Role in Yemen War
Churches for Middle East Peace joins 54 organizations in calling on U.S. senators to support S.J.Res. 54. The letter questions the constitutionality of the executive use of military force without congressional authorization and draws attention to the horrendous cost in human life the Saudi-led war has amassed.

Yemen Conflict: How Bad is the Humanitarian Crisis?, BBC, 2017

Yemen: 2018 Humanitarian Needs Overview [UN Office of the Coordination of Human Rights Affairs, 2017]
“More than two and a half years since the escalation of the conflict, Yemeni people continue to bear the brunt of ongoing hostilities and severe economic decline….an estimated 22.2 million people in Yemen need some kind of humanitarian or protection assistance, including 11.3 million who are in acute need” Read More

Yemen: Humanitarian Dashboard [UN Office of the Coordination of Human Rights Affairs, 2017]
A situational overview of the humanitarian crisis in Yemen focusing on the international response. Concludes with a report on the most urgent needs in terms of food security and agriculture, water and sanitation, health, and nutrition. Read More

Yemen–Snapshot of Health Facilities Based Reported Deaths and Injuries [World Health Organization, 2017]
A report on total fatalities and casualties from the civil war by province as reported by medical facilities in Yemen from 2015-2017. Read More

Food Insecurity Crisis in Yemen [World Health Organization, 2017]
A look at the severity of food insecurity reported in each province of Yemen during the summer of 2017. Read More

Yemen–Cumulative Number of AWD and Cholera Cases [World Health Organization, 2017]
This infographic documents the number of cases of cholera and acute watery diarrhea by province in Yemen during the summer of 2017. Read More