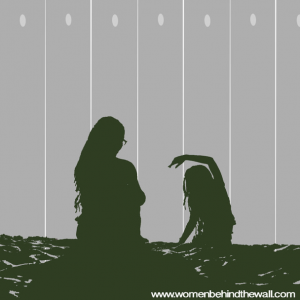 Layali’s experience, along with her mother’s, Hind, is featured on the first, full-length podcast episode of Women behind the Wall. Listeners are introduced to the mother and daughter who live in Bethlehem, and as a Christian Palestinian family, long for the situation on the ground to change. This episode introduces listeners to movement restrictions created by the system of checkpoints, walls, and permits for those in the West Bank and how that interrupts everyday life.

Hind tells listeners about her family that used to live in the same building as them, share daily meals, and the children who were growing up together. But because of the movement restrictions and the economic impact, life became too difficult, and her family moved away in search of opportunity in another country. “Because they went to find a better life… occupation is part of this.”

The reality on the ground, and how it has affected their family made Hind realize her children were absorbing the hurt in their hearts against Israelis. As children, they are not involved with the political debates that occur around the conflict; they simply miss life with their cousins and the extended family who moved away. The loss of loved ones due to the occupation is ever-present and Hind makes a concerted effort to not sew anger in herself, feeling that she must combat those types of perspectives in her children through their Christian faith. She admits though, life is very hard as a Palestinian living behind the wall: “Every time I think I want to leave, God gives me more ministry here to stay. But to be honest, if God opened the door to leave, it would be very hard to say no.”

The occupation adds another layer to Hind’s parenting as she finds it difficult at times not to contradict the values she tries to teach her children. Like the time her son asked why they cannot picnic and play where they used to on a piece of land near their home that is now on the other side of the wall. The answer, Hind feared, would put something in her child’s heart against Israelis and she speaks about having to think twice – or more – about what she says. “I don’t like to see my child hating, you know, or start to have something in his heart. So for me as a mother to live under occupation, it’s very sensitive what you say to your kids.” At other times, like when soldiers came into their neighborhood and were shooting, and Layali expressed being afraid to play outside, Hind admits she has no answers for her children.

Even the labels around geography become confusing for young kids related to the occupation. Parenting through what land is whose and whether they call it “Israel” or “occupied Palestine” becomes a mental roadblock in addition to the physical ones faced. This discussion helps listeners gain an understanding of the issue as more complex and nuanced than one of merely border control. Things like road closures, checkpoints, and the extensive Israeli military permit system of more than 100 types that restrict movement to freely visit family members, attend religious services, seek medical care, or run errands, not only present the inconvenience and frustration of it all, but allows outsiders to identify with a common understanding we all share as humans.

Hearing Hind and Layali’s perspectives on how the occupation extends beyond the larger picture of political discourse provide us with information that is often overlooked or unheard completely about the very real and present effects on the average Palestinian’s life. Both mother and daughter express a hesitant acceptance of the reality on the ground since it has been the status quo in the West Bank for so long, though they remain hopeful through Christ that one day they will move freely within the land they call home.

Lord, we pray for the parents and children experiencing the violence of this conflict. We ask for courage to speak out against injustice against the innocent, and a conviction to put an end to this suffering. Let us be emboldened by the Spirit to protect the little ones.