The Gaza Strip is one of the most densely populated places on the planet. It is home to more than two million Palestinians living within a stretch of territory 32 miles long by seven miles wide. Since 1967, this territory has been under Israeli military control. 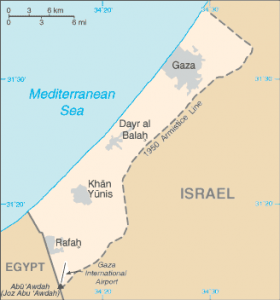 The 2014 conflict had devastating consequences on civilians in Gaza, including the death of over 500 children.

During the May 2021 conflict, 260 Palestinians, including 66 children, were killed by the Israeli military, which launched indiscriminate attacks including the destruction of four high-rise towers. Hamas fired over 4,000 rockets and mortars at Israel, killing 13 Israelis; 7 Palestinians in Gaza were killed by Hamas rockets that misfired.

Israel also engaged in a weekend bombing campaign in early August 2022, during which at least 49 Palestinians, including 17 children were killed (at least 5 of the children were confirmed killed by an Israeli airstrike). In response, Palestinian Islamic Jihad (PIJ) fired rockets at Israel that did not result in any Israeli casualties.

Israel’s blockade has prevented Gazans from rebuilding the extensive damage caused by these conflicts. This has resulted in an infrastructure crisis that has crippled Gaza’s economy. Electricity is infrequent, drinking water is toxic, and raw sewage pours into the Mediterranean. About half of Gazans are unemployed and 70 percent depend on foreign humanitarian aid.

CMEP advocates for an end to the blockade and closure of Gaza. The blockade limits the import of basic necessities and materials desperately needed to rebuild after the recent wars in Gaza 2008/2009, 2012, 2014, and 2021. The restrictions on travel have limited Palestinians’ access to health care, religious holy sites, and educational institutions outside of the Gaza Strip. CMEP also strongly condemns rocket fire from Gaza into Israel. 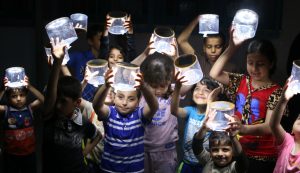 Hours of Electricity Per Day: 15

CMEP calls on the US government to work to preserve the ceasefire and to insist Israel ends its 15- year blockade of Gaza, an ongoing humanitarian catastrophe, and an act of collective punishment that has turned Gaza into the world’s largest open-air prison. The U.S. must stop enabling Israeli impunity in violating human rights and humanitarian law, and instead, work toward a comprehensive and enduring end to the conflict that will result in human rights and equality for all Israelis and Palestinians. Read More

Gaza Amendment Coalition letter to U.S. Senators supporting a proposal requiring a report on the humanitarian impact of severe restrictions on movement, access, and goods in and out of Gaza [8/15/2021]

A large coalition of groups including CMEP wrote to members of the U.S. Senate urging them to support an amendment, sponsored by Sen. Bernie Sanders, to the 2022 National Defense Authorization Act (NDAA) that would require a report on the humanitarian impact of severe restrictions on movement, access, and goods in and out of Gaza. Read More

Watch CMEP’s April 2021 webinar featuring local organizations working in Gaza. Beth Oppenheim, the Director of International Relations at Gisha – Legal Center for Freedom of Movement, and Bassam Nasser, the Head of Office in Gaza for Catholic Relief Services, speak about their work and experiences as humanitarian workers and human rights advocates dedicated to serving the people of Gaza. Facilitating this discussion is Craig Swandby, a Senior Policy and Legislative Specialist at Catholic Relief Services. Watch

During the 2014 Gaza War, the main power plant in Gaza was damaged severely. Since then, the infrastructure crisis has grown exponentially. Exacerbated by the difficulty in purchasing Diesel due to a financial conflict between the Palestinian Authority and Hamas, Gazans are impacted in three crucial areas, energy, water and communications, which stunts any hope for stability. Currently, Gazans typically only have electricity for 3-4 hours per day, leaving them in darkness for about 21 hours. Continue Reading

Hear Tania Hary, Executive Director of the Israeli human rights organization Gisha, and Executive Director of Churches for Middle East Peace Rev. Dr. Mae Elise Cannon, recently returned from Gaza, engage in a conversation on the humanitarian crisis in Gaza. Learn about the current realities of Palestinian life in Gaza where most Gazans live in the dark for as many as 21 hours every day. Watch

The U.N. once predicted Gaza would be ‘uninhabitable’ by 2020. Two million people still live there, Washington Post, January 2, 2020

“Until the international community brings sufficient pressure to push Israeli authorities to abandon their longstanding policy to subdue the Palestinians of Gaza, this vicious cycle will continue.” Read More

“Since May 2021, Israel has delayed and prevented the entry into Gaza of items needed urgently for maintenance and improvement of Gaza’s water and sewage systems, exacerbating the risk of collapse.” Read More

The Gaza Strip and COVID-19: Preparing for the Worst [International Crisis Group, 2020]

“The coronavirus is now present in Gaza, the populous Palestinian enclave blockaded by air, land and sea since 2007. An epidemic would be calamitous. Hamas should tighten public health measures; Israel should loosen restrictions so that medical supplies can enter and afflicted Palestinians can leave.” Read More

US Policy Response to Coronavirus in Gaza [Carnegie Endowment, 2020]